AMC Entertainment Holdings (NYSE: AMC) is perhaps best known for its part in the meme-stock frenzy of 2021. This was when a select few stocks gained the interest of retail traders who got together on social media sites and encouraged each other to buy and hold shares. As a result, the chosen stocks, including AMC, skyrocketed in price.

Nevertheless, AMC benefited from their support, and is now back on a firmer footing after being devastated by pandemic-induced shutdowns of all its theaters.

In its most recent quarter, which ended on March 31, AMC generated $ 786 million in revenue. That was a substantial increase from the $ 148 million it earned in the same quarter last year. This time last year, the world was not as far along in economic reopening. Many restrictions were in place, and folks were less comfortable visiting crowded movie theaters. Indeed, the coronavirus pandemic has wreaked havoc on AMC’s business, which saw revenue decline by 77% in 2020 due to forced closures and changes in consumer behavior.

According to chairman and CEO Adam Aron:

Our results for the first quarter of 2022 represent AMC’s strongest first quarter in two full years. We continue on our pandemic recovery trajectory, more than quintupling revenues and improving adjusted EBITDA [earnings before interest, taxes, depreciation, and amortization] by nearly eighty percent compared to a year ago. The significant progress AMC has made is very rewarding, as our guests continue to recognize the unparalleled movie-going experience offered by AMC.

That said, AMC still has a long way to go before recovering entirely from the pandemic. In 2019, the final year before the outbreak, AMC’s revenue totaled $ 5.47 billion. Fortunately, blockbusters are returning to the big screen again, enticing consumers to come back to theaters. AMC is optimistic for the rest of 2022, partly because of the exciting films that are scheduled to be released, including the sequel to Avatarthe highest-grossing movie at the time it was released. 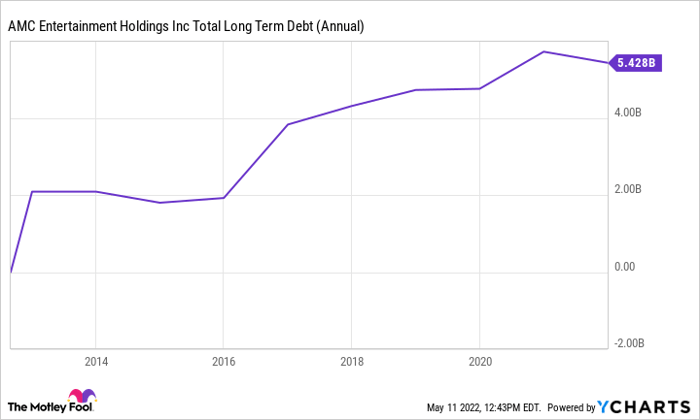 AMC could use the help. Even with a fivefold increase in revenue, the company is still unprofitable on the bottom line. In the quarter that ended in March, it reported a net loss of $ 337 million, down from a loss of $ 567 million at the same time last year. The company hopes for the recovery to gain momentum sooner rather than later. It lost $ 295 million in cash from operations, and with just $ 1.16 billion in cash on the balance sheet, it can’t endure many more quarters like this one.

To make matters worse, AMC has $ 5.5 billion of debt on the balance sheet, up from $ 5.4 billion last year.

AMC is moving in the right direction, if slower than shareholders would like 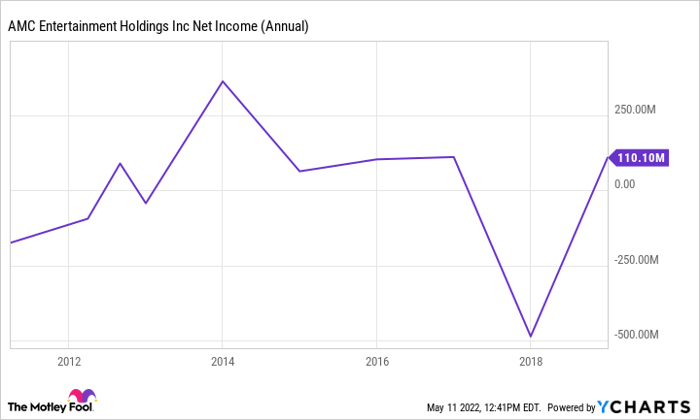 After exploding to over $ 60 per share, AMC’s stock price is trading at $ 10.73 as of this writing. Even at a lower price, the stock is overvalued. The company has struggled to deliver profits, generating losses on the bottom line even in the years before the pandemic began.

Regardless, the current quarter was another step in the right direction for the movie-theater chain. It can hope that the momentum gains steam for the rest of the year, and brings the company’s financial situation into a more sustainable balance.

10 stocks we like better than AMC Entertainment Holdings
When our award-winning analyst team has a stock tip, it can pay to listen. After all, the newsletter they have run for over a decade, Motley Fool Stock Advisorhas tripled the market. *

They just revealed what they believe are the best stocks for investors to buy right now … and AMC Entertainment Holdings wasn’t one of them! That’s right – they think these 10 stocks are even better buys.