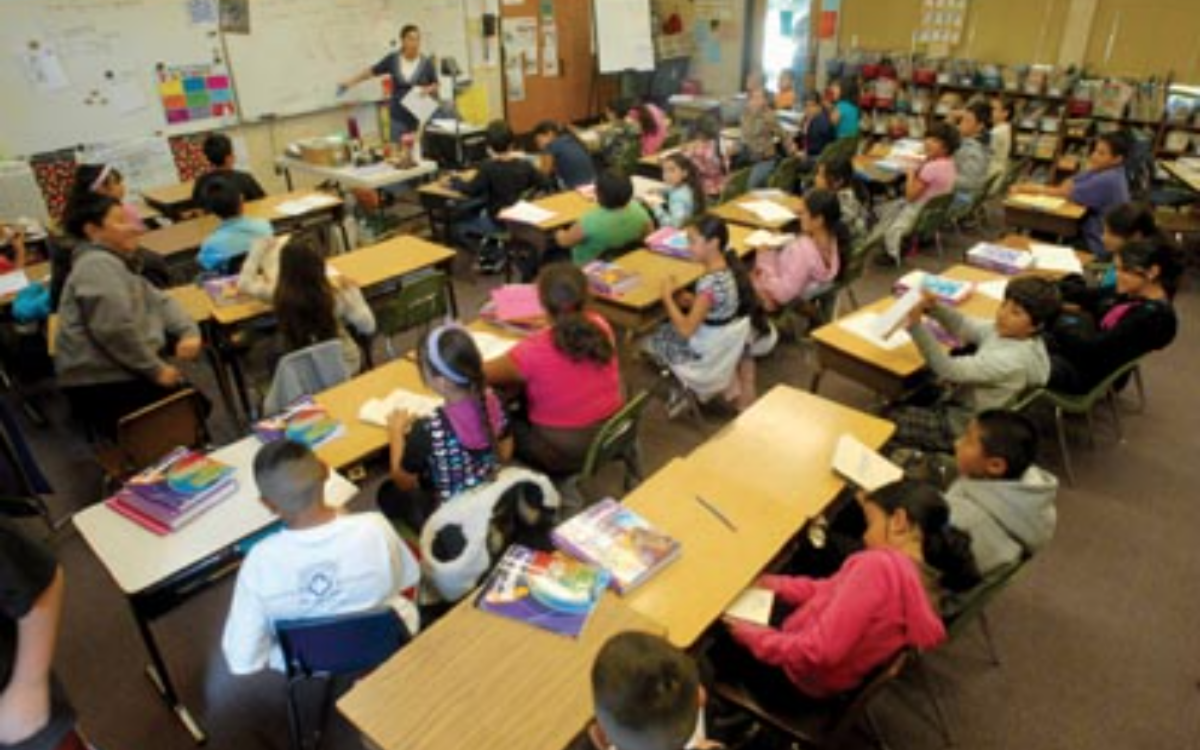 A crowded classroom in California in 2010, near the end of the Great Recession. 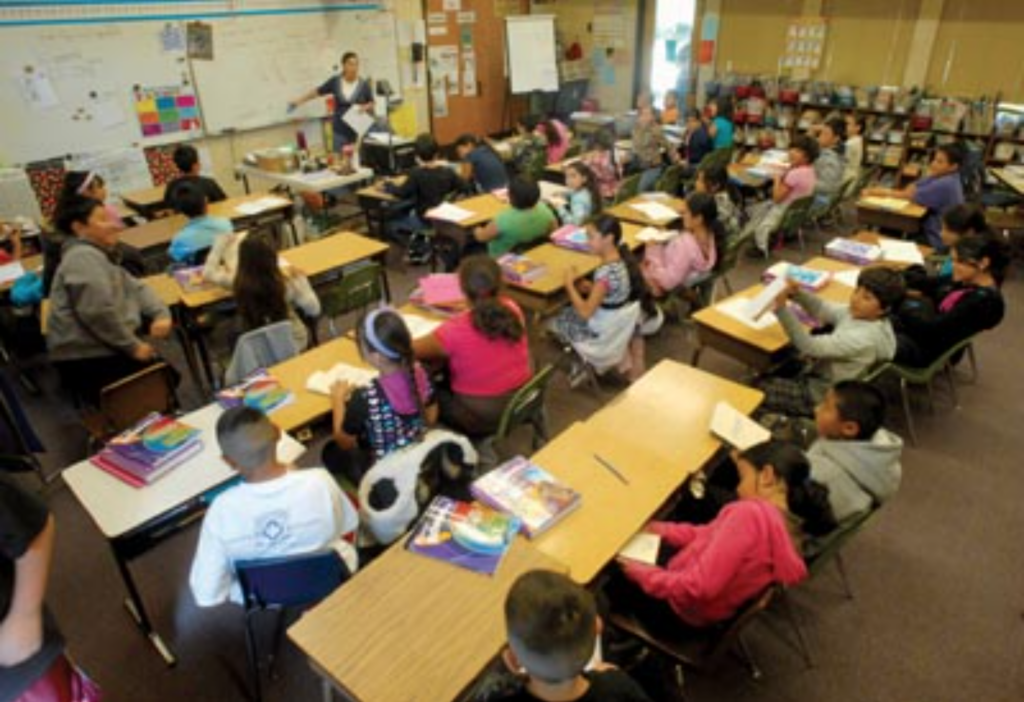 A crowded classroom in California in 2010, near the end of the Great Recession.

A new analysis of the enduring impact of Proposition 13, the 1978 initiative that voters passed as a backlash against rising property taxes, concluded it has contributed to a widening wealth gap, a severe housing shortage and, for decades, inadequate funding for public schools.

“Proposition 13 is just one example of what happens when a purported progressive state allows a privileged few to hoard opportunities and resources at the expense of the greater good,” concluded the report “Unjust Legacy” by the Opportunity Institute and Pivot Learning, released on Wednesday. The institute is a nonprofit advocating for equitable outcomes for Californians; Pivot Learning is a consulting organization that works with schools in California and other states on improving achievement.

The 45-page report did not recommend a particular fix for Prop. 13, although it presented several scenarios that could result in billions of dollars of additional K-12 funding. The remedy would depend on which goal you’re trying to address, it said: Generate more revenue or increase revenue stability? Increase tax fairness? Expand access to homeownership? Increase local control over taxation or give the state Legislature more control? The report’s aim was to provide a broader understanding of Prop. 13’s legacy for policymakers and researchers to explore angles in depth.

With the release of the report Unjust Legacy, The Opportunity Institute and Pivot learning will explore three questions at a Wednesday, June 22 webinar from 12:30 to 2 pm: How has the accrual of residential property wealth by race changed over the past 40 years ? Which homeowners most benefit from California’s cap on property taxes? How much more revenue could the state generate if it changed its property tax policies, and how would school districts benefit from such a change?

Inspired by Howard Jarvis, a Republican businessman and unsuccessful politician, Prop. 13 received 65% of the vote. Among its features, Prop. 13:

Prop. 13 coincided with fast-rising government spending, double-digit inflation and soaring housing prices that, in turn, caused higher property assessments and bigger property tax bills. Senior citizens on fixed incomes and workers whose raises could not keep up with inflation complained they were being taxed out of their homes and priced out of California.

But the report suggests a darker motive, too. The ’70s was a decade of sizable immigration of Latinos and Asians with children in schools, and the state’s mix of population, then two-thirds white, was changing. There was talk for the first time of an eventual majority-minority California.

“Proposition 13 was also just one in a contemporaneous wave of state referendums that had xenophobic and racist overtones,” the report states, referring to several studies.

Prop. 13 was preceded by a series of court rulings, known as the Serrano decisions, in which the California Supreme Court ruled that funding schools based on property values ​​violated the rights of children in school districts with a low tax base. The court did not rule out funding schools through property taxes; it said the revenue had to be distributed more fairly. And that’s what the Legislature proceeded to do with legislation pushed by Gov. Jerry Brown in 1976, said Michael Kirst, an emeritus Stanford University professor who was Brown’s president of the State Board of Education and adviser at the time. But then Prop. 13 passed, pre-empting its enactment, he said.

The result was a hollowing of school funding, with California falling from the fifth in per-student funding to 47th in the nation in the next two decades. In 1988, voters approved Proposition 98, guaranteeing a portion of the state’s general fund – about 40% – would be allotted to K-12 schools and community colleges. Prop. 98 supporters envisioned legislators would treat the requirement as a minimum level of school funding, but in most years it has served as the ceiling, not the floor.

Those districts whose property values ​​generate per-student school funding beyond what the state funds – primarily high-income communities – are exempt from Prop. 98. Today they make up about 15% of districts serving about 5% of students, according to the report. High-income communities have supplemented state funding with parcel taxes, which required a two-thirds majority approval because of Prop. 13 – a big barrier contributing to disparities.

But Prop. 98 funding levels for schools have soared since the end of the Great Recession (2007-09), amplified by an income tax surcharge on top income earners that voters made permanent in 2016. The top 1% of earners now fund half of the state’s income taxes.

As the report noted, in 2019-20, California’s per-student funding, unadjusted for regional costs, reached the national average. And the Legislature is poised to pass a state budget in which per-student funding will likely well exceed the national average – with funding for low-income districts that receive extra money under the state’s Local Control Funding Formula even higher.

At least for 2022-23. But the flip side of tax progressivity is volatility; a state tax structure dependent on revenue from capital gains follows stock market gyrations. During the Great Recession, state funding for schools fell $ 7 billion or about $ 1,200 per student.

“It’s a reminder that the boom and bust cycle is real. Property taxes are a piece of the puzzle to smooth out volatility, ”said Carrie Hahnel, senior director of policy and strategy with the Opportunity Institute.

If a recession were to happen this year, as some forecasters predict, school districts are better poised than a decade ago to weather it, but the impact of a sizable recession would still be jarring. Revenue from property taxes has been more stable and predictable – and still could be, depending on how a Prop. 13 reform were structured.

“I’ve always said school funding should be a three-legged stool, with local, federal and state participation for stable and growing funding,” Kirst said. “We need to get local districts back in a way that transcends parcel taxes and developers’ fees.”

One way, briefly mentioned by the report, could be to phase out the 1% limit on taxing property or 2% limit on reassessing property values ​​annually, and to share a portion of the revenue to supplement income-poor districts’ tax increases, perhaps in the same region or county. Not equalizing the revenue could revive Serrano-type lawsuits and court intervention.

Apart from education funding, the report documents other inequalities from Prop. 13. The limit on property tax increases encouraged homeowners to hold on to their properties longer than in other states, resulting in fewer houses on the market. Owners were able to factor in market scarcity in setting the price of a home and, until recently, were able to pass on the house at the same assessed value to children and grandchildren, as an inheritance.

Because of redlining, exclusionary zoning and racism, Black, Asian and Latino Americans for decades were unable to obtain mortgages or buy into many neighborhoods where they could build the same kind of intergenerational wealth that high-income white families have been able to achieve, in part through Prop. 13, the report said.

As the report noted, many factors – large-lot zoning, high land costs, government fees – contribute to the high cost of housing. By limiting property taxes, Prop. 13’s contribution was to encourage cities and counties to zone land for retail and manufacturing rather than housing, in order to get sales tax and business revenues. Cities fought each other for big-box stores and ignored housing needs.

“Proposition 13 will continue to prevent us from having more equitable resources for housing and local government; it relates to how well we support families and children, ”Hahnel said. “That’s why we are calling for another look at the effects of Prop. 13. ”

Prop. 13 has remained popular in polls – and viewed as politically untouchable for decades. But in 2020, a statewide initiative to reassess commercial properties at market value to produce additional state funding came close to passing, with 48% in favor, and another initiative did pass. Proposition 19 requires that heirs of an inherited, low-assessed property live in the house, not make money by renting it.

In a statement Tuesday, the anti-tax Howard Jarvis Taxpayers Association, named after the father of Prop. 13, dismissed the Legacy report as “a thoughtless assault on California property owners.”

“Out-of-touch researchers are wasting their time and yours by issuing yet another report on how much more money the government could collect if only it was allowed to take it,” it said.

Kirst acknowledged it could be a hard sell to convince voters to raise property taxes for more state revenue, but praised the report as “a first of a kind analysis with a focus on equity that had not been well analyzed.”

“It is a major contribution to school finance in California,” he said.