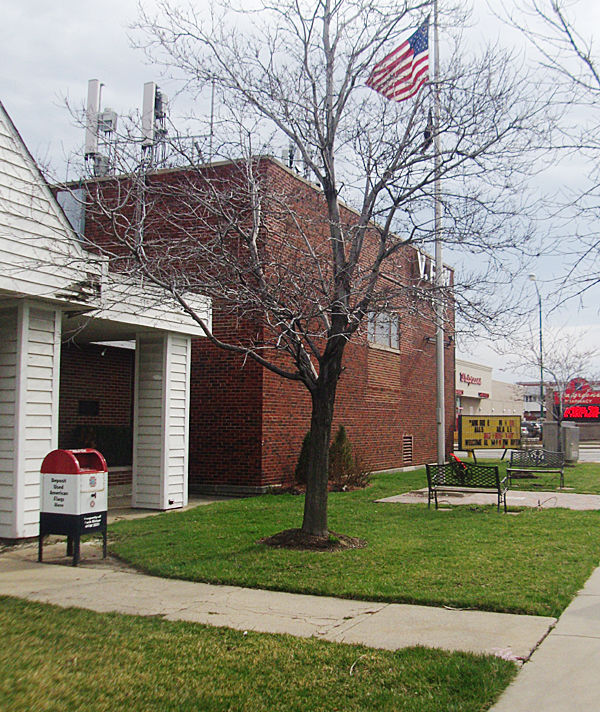 Bridge City Collective was granted a special use on Monday night to redevelop the old VFW Post property at 10 Higgins Rd. as a recreational cannabis sales location – an issue which has been absorbing the attention of the Planning and Zoning Commission and the Park Ridge City Council for close to six months.

Voting to approve the permit request, which had been amended at the June 6 council meeting, were John Moran (1st), Fred Sanchez (2nd), Charlie Melidosian (5th) and Rick Biagi (6th). Continuing to oppose this location for a special use permit were Gail Wilkening (3rd) and Harmony Harrington (4th).
Melidosian and Biagi had originally voted against it.

Aldermen had turned down the application in April with three votes in favor and four against, but Bridge City representatives filed an immediate appeal late on Good Friday, that sent the case back to P&Z on a schedule requiring time sensitive public notices for the public hearing. Marty Joyce would be departing as 7th Ward alderman at the end of May, and there was no time to appoint a replacement who could speak on behalf of 7th Ward residents in whose backyards the dispensary seemed to be too close for comfort.

Joyce had voted in favor of the project – he was one of the original “yes” votes – but he was not still in office when the appeal returned to City Council June 6. Biagi, an attorney, had led the council in asking that a laundry list of incentive promises offered by Bridge City Collective at the P&Z appeal be incorporated in the City Council’s conditions for permission, should it be approved on appeal.

Considerable rebuilding of the brick building, which has deteriorated while empty, is proposed to address its present condition.

* Holding ongoing meetings with the community.

* Creating a 16 ft. landscape buffer at the northern end of the property, to substitute for a lack of an alley between the 10 Higgins property and the nearest neighbors. Including neighbors in the landscape design discussions.

* Offering to consider future purchases of adjoining properties. These would be primarily residential buildings.

* Relocating the entrance of the building, currently facing Canfield, to the parking lot north of the building. There would be separate entrance and exit doors at the back, which are required by state law. Customer vehicle access would be from Canfield.

* Enhanced security on the premises. Only one customer would be allowed to enter the secured vestibule at a time.

* No onsite consumption of the product on the premises.

* A channelized access drive along Newton Avenue west of the property, with some restrictions on who would use it. Neighbors continue to object that it places access from the facility too close to single-family homes.

* Should there prove to be a lower than expected income to the city from its share of state-regulated cannabis sales taxes, Bridge City Collective would consider discussing payment of an impact fee.

Operating hours are still a sore point with neighbors who have continued to send representatives to the hearings. Bridge City Collective is asking for 12-hour sales, 9 am to 9 pm, seven days a week. That means customers, waiting for doors to open, could be standing outside near the grade school or high school bus stops. Unless future councils impose stricter limits for any Park Ridge dispensaries, currently approved or those who will later apply for one of the city’s two licenses, these would not change.

While explaining her continued opposition to cannabis sales at 10 Higgins, Harrington pointed to the Busse Highway corridor, backed up against the Union Pacific railroad tracks in a B3 business district which had already been approved earlier for medical marijuana sales location zoning. She suggested the abandoned Burger King drive-through, isolated from residential areas, as a more appropriate site. Park Ridge did not get any applicants for the limited licenses for medical marijuana.

“Future councils can change all of this,” said Mayor Marty Maloney. “We can’t tie the hands of future councils.”

In lengthy council discussions with city attorneys from Ancel, Glink – Adam Simon on June 6 and Julie Tappendorf on June 20 – legal distinctions were made between granting a special use under current city policy and making city-wide changes in policy later that would apply to all current or future cannabis sales sites.

The rules governing the two unspecified sites allowed for recreational cannabis sales in the city’s ordinance – hurried through P&Z and City Council by former Community Planning & Development Director Jim Brown – paid little attention to the very early and very late sales hours allowed in recreational cannabis draft legislation. It was allowed in business districts, but those often include adjacent blocks to residential areas where the safety of having customers lined up from morning to evening seven days a week was questioned.

This year’s aldermen cannot dictate to their successors, but they could impose changes later for businesses with all cannabis special recreational use holders, Tapendorf said.

Support local news by subscribing to the Journal & Topics in print or online.