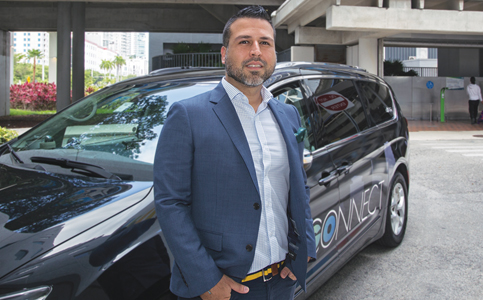 Following the footsteps of his father, Carlos Cruz-Casas enrolled for a civil engineering degree at the University of Puerto Rico, Mayagüez Campus, and then became interested in transportation. “I remember my first job at the university was with the Transportation Technology Transfer Center, where I was tasked with mounting vehicle detection cameras on traffic signals,” he recalled.

After college, he started in Miami-Dade public transit, he needed to join the public sector.

In 2012 he joined the City of Miami as the chief transportation manager, helping to launch the Miami Trolley Program, the City Bike Program, and many new mobility components.

In 2015, the opportunity came up in Miami-Dade County, and Mr. Cruz-Casas joined the Department of Transportation and Public Works when the two were consolidated into a single department. As his assistant director for strategic planning, his goal was to think about mobility as a whole and integrate buses, trains, bikes and all modes of transportation.

In April, he became the chief innovation officer for the department, working on understanding the opportunities that can be applied to drive mobility innovation. In that position, it works on exciting projects including the use of autonomous vehicles, GO Miami-Dade Transit (MDT) Texts, the use of artificial intelligence on CCTV cameras, paratransit services, and more.

To read the full article and the rest of the Miami Today issue, subscribe to e-MIAMI TODAY, the exact replica of the printed edition.