While many of us are scratching our heads over what “metaverse” means, some Shanghai technology firms are busy researching how to make this blockbuster digital trend even better and more profitable.

The “meta” world is the hot new buzzword in Shanghai. It might be defined as a simulated three-dimensional digital environment that blends augmented reality, virtual reality and blockchain technology with social media concepts to create a “space” that mimics the real world and is rich in user interaction.

The term “metaverse” was first coined by Neal Stephenson in his 1992 science fiction novel Snow Crash, where humans, as programmable avatars, interact with each other and software agents, in a metaphor of the real world.

This emerging virtual realm is teeming with commercial potential, and Shanghai is at the forefront of its development in China to cash in on the trend. In fact, the city was the first in China to include metaverse in its long-term development plans, with accompanying economic support.

Local firms, including many smaller companies, are developing “components” of the metaverse, covering industries like urban management, entertainment, culture and marketing. Developments include work on super-realistic avatars with simulated human wrinkles and blood structures, and a digital “twin” industrial park copied in detail from the physical world.

Shanghai says it will actively guide and stimulate creativity of market players, allowing enterprises to address market demand, said Qiu Wei, a senior official at the Shanghai Commission of Economy and Informatization. “The principle is to use the virtual to empower the real economy and society.”

It’s a strategy different from the path chosen in the West, where technology giants like Meta (formerly Facebook) and Google are pioneering the new realm.

These Western companies invest heavily in metaverse worlds connecting several millions or even billions of users. They often use social networks, streaming services and video game platforms to attract people to the virtual metaverse, which isn’t necessarily interconnected with the real-world economy. 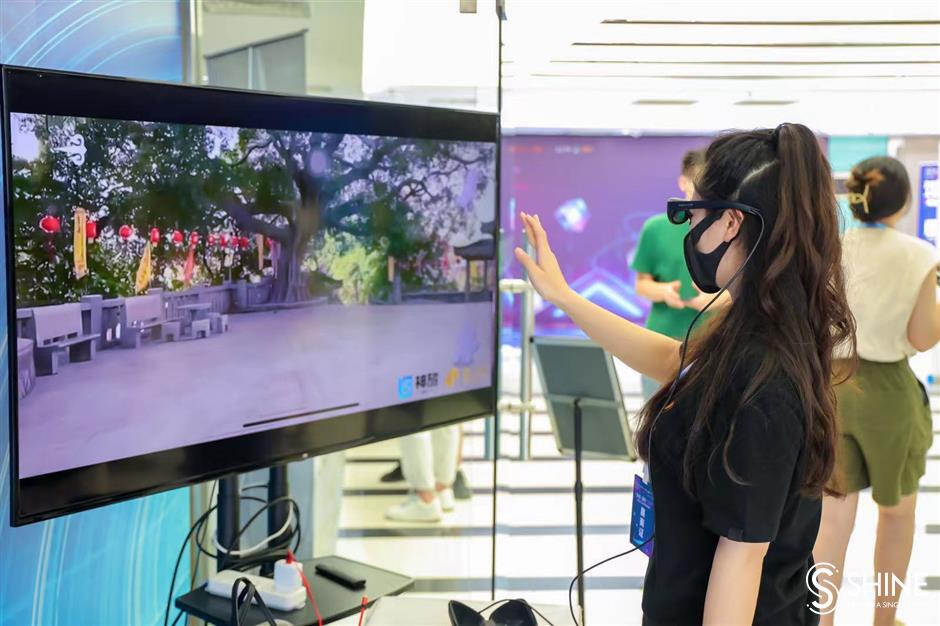 Shanghai’s first metaverse industry alliance was formed in July in Zhangjiang in the Pudong New Area. Zhangjiang is home to many chip, smart hardware, artificial intelligence and cloud companies – all of which are essential components of the metaverse world.

The alliance of more than 20 founding organizations aims to integrate industrial resources in Zhangjiang and build a cooperative platform on market promotion, research and development, and talent training.

WAYZ, a member of the alliance, has established a virtual space encompassing the entire 4.1 square kilometers of the Zhangjiang region.

With glasses or smartphones, people can visit the Zhangjiang metaverse world to obtain coupons for shopping centers, to talk with digital avatars, to check on parking-lot vacancies and to locate underground water pipes, among other applications. 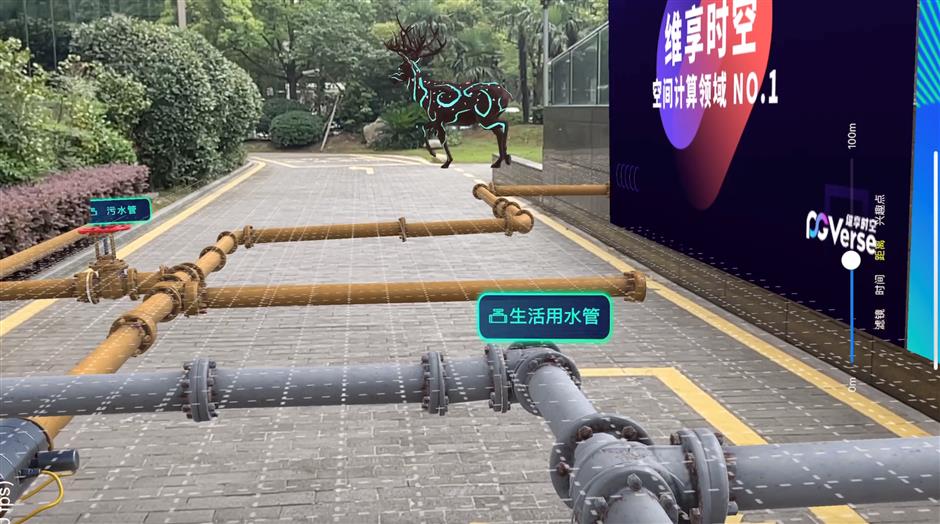 Another alliance member, EasyAR, offers to build virtual worlds for cultural and tourism sites and shopping centers, accessed by visitors with glasses or special mobile mini programs. Its clients include Yuyuan Garden, Palace Museum, also known as the Forbidden City, and Shanghai Haichang Ocean Park. Many guide contents are fixed while some can be updated and customized, said Tu Yi, founder and CEO of EasyAR.

“We are playing a role in AutoNavi Maps (China’s Google Maps) in the metaverse world,” Tu told Shanghai Daily. “It’s a necessity everywhere.”

Currently, EasyAR system has about 200,000 third-party developers – 40 percent of them overseas.

Alice, a virtual idol created by GLA Art, celebrated her first anniversary in July. In her first year, Alice has taken on many roles, including music producer, fashion editor and promoter of brands such as Gucci, Nike and watchmaker IWC.

With the new technologies, a super realistic avatar can be created within three days, compared with three to five months previously. The avatars delicately reproduce human wrinkles and changes in blood in pixels, and have micro-expressions and human-like emotions. The avatars can be used in design and marketing sectors, said Deemos, a startup offering digital identity in the metaverse.

The company also offers a simplified animation avatar for consumers to be stored in smartphones. Deemos, created in a startup-nurturing project at ShanghaiTech University, has made about 700 animation avatars for students and graduates. 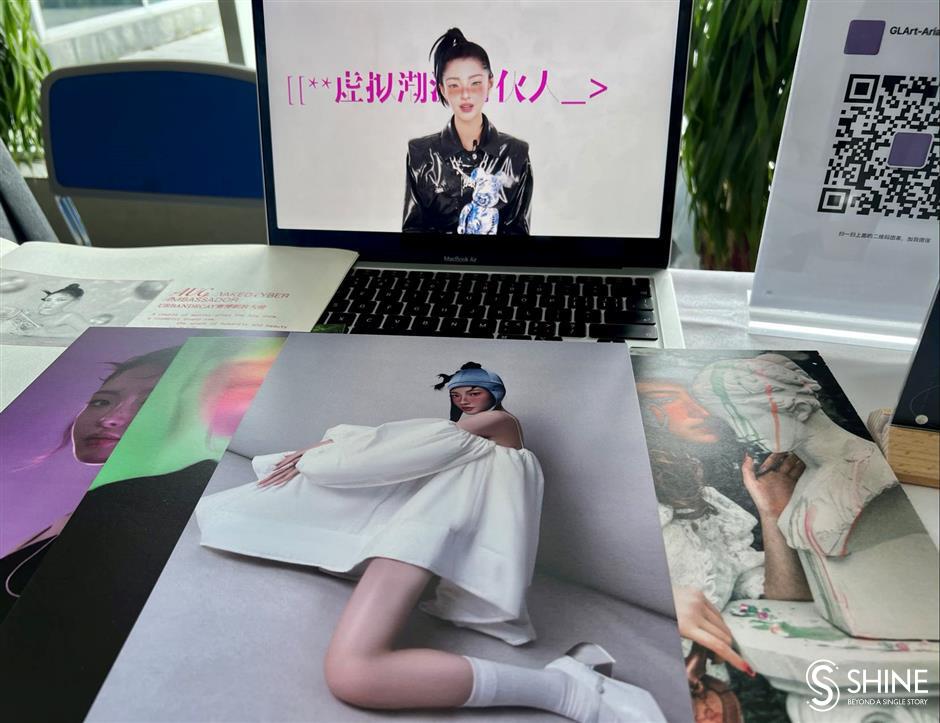 Virtual idol Alice has played many roles in the past year.

A super realistic avatar can be made within three days, according to startup Deemos.

Shanghai Daily was recently invited to attend a metaverse conference that featured a simulated meeting hall with rooms and elevators, direction signs on the floors, welcoming ladies, organizers’ business cards on a reception desk and seats to click to sit down.

Everyone was required to create an avatar with choices of name, title, clothing style and gender. That identity was projected on a visitor’s head.

Startup Gooey, the conference organizer, and its partners outlined a bright future for metaverse in digital marketing, conferencing, exhibitions, the virtual community and digital information collection.

“Metaverse marketing demand in China can’t be fully met yet,” said Wang Ning, founder of Gooey, who calls himself a metaverse marketing specialist. “It’s a new communication channel that touches a new generation of consumers willing to try and spend.”

A metaverse-style conference was held in Shanghai recently, with virtual front desk, meeting rooms and elevators.

“Everyone is talking about NFT,” Chen told Shanghai Daily. “My business is a licensing business, instead of traditional marketing.”

Chen said authorized gifts can be tracked but are not for resale or resending to others.

NFTs are often traded in cryptocurrencies overseas, while such trading remains illegal on the Chinese mainland. In the domestic market, the trade in NFT products in yuan often raises legal and social issues, like scalping and over-hype.

“Shanghai will strengthen mechanisms and guidance on metaverse to prevent risks, while creating an inclusive and open environment,” Qiu said.

Potential risks also include network security and personal information leakage, which can be dealt with by technology, according to ANGeek, a Zhangjiang-based cyber security startup.

In addition to Zhangjiang, Shanghai has also opened a city-level metaverse industrial park in Caohejing in Xuhui District.

Such developments promise to increase the value of the metaverse in the city to 350 billion yuan (US$54 billion) by 2025.