Pharma giant AbbVie (NYSE: ABBV) has rewarded shareholders in the past decade with market-beating performance. That is especially noteworthy considering many pharma companies struggled through much of the 2010s as evidenced by the fact that the SPDR S&P Pharmaceutical ETF – an industry benchmark – substantially lagged the market in this period. AbbVie’s strong showing was primarily the result of its top-selling drug, Humira.

However, Humira lost patent exclusivity in Europe in 2018, and it will start facing generics in the US next year. How will AbbVie fare post-Humira? If the company manages to replace the medicine, it could deliver many more years of solid performances. Let’s look closer at whether it is still worth it to purchase shares of AbbVie today.

AbbVie’s shares dropped about 10% after it released its first-quarter results. The company’s update wasn’t that bad; revenue increased by a modest 4.1% year over year to $ 13.5 billion. Sales of Humira declined by 2.7% year over year to $ 4.7 billion. That’s hardly surprising, considering that the rheumatoid arthritis medicine continues to face generic competition in various international markets. AbbVie’s adjusted earnings per share increased by 9.3% to $ 3.16.

So why did AbbVie’s shares drop on the heels of its earnings release? The sell-off probably happened due to a drop in sales of various products, especially cancer drug Imbruvica. Revenue from medicine declined by 7.4% year over year to $ 1.2 billion as a result of competition from other cancer drugs. 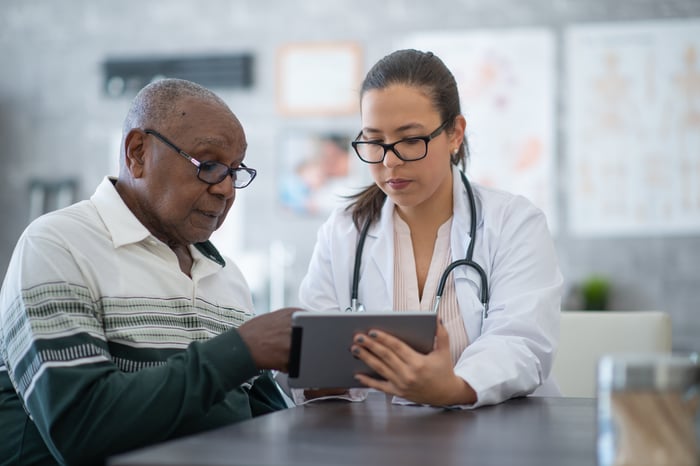 While it’s never a good thing when sales of one of a pharmaceutical company’s products decline, Imbruvica was already facing issues before this quarter. Last year, AbbVie’s global revenue from Imbruvica increased by a meager 1.8% to $ 5.4 billion. This unimpressive result was also due in part to stiffer competition on the market. The good news for AbbVie is that some of its most important products that will replace Humira are still performing well.

These include immunosuppressants Skyrizi and Rinvoq, which will soon have earned approvals across all of Humira’s major indications. In the first quarter, Skyrizi’s sales increased by 63.7% year over year to $ 940 million while Rinvoq’s sales grew by 53.6% year over year to $ 465 million. AbbVie expects these two products to generate more than $ 15 billion in revenue in 2025.

Note that Humira hit its peak sales last year at $ 20.7 billion. Once generics enter the US market, Humira’s revenue won’t immediately drop to zero. The therapy will continue contributing to AbbVie’s top line for a while longer.

Meanwhile, some of the company’s other segments are performing well, too. Sales of AbbVie’s aesthetics unit – spearheaded by Botox Cosmetics – grew by 20.5% year over year to $ 1.4 billion. With Botox Therapeutics at the helm, the company’s neuroscience division reported revenue of $ 1.5 billion, 19.2% higher than the year-ago period. AbbVie’s lineup looks increasingly ready for a post-Humira world.

Despite Humira’s impending loss of exclusivity in the US, AbbVie remains an excellent stock. First, as we have already seen, the company’s lineup is strong enough to handle the inevitable sales drop that Humira will experience once it starts facing generic competition in the US With the potential for label expansions and brand new drugs, AbbVie’s pipeline will also be instrumental in helping the company keep its revenue afloat. The drugmaker is currently running dozens of clinical trials.

Second, AbbVie looks attractively valued at the moment with a forward price-to-earnings (P / E) ratio of 10.9, compared to an average of 12.8 for the pharmaceutical industry. Third, AbbVie is an excellent stock for dividend-seeking investors. The company offers a juicy yield of 3.67% – which is much higher than the S&P 500‘s yield of 1.37%. AbbVie is a Dividend King, having raised its payouts for 50 consecutive years (including its time under the wing of medical-devices specialist Abbott Laboratories).

AbbVie will continue to provide growth and income to patient investors. It’s far too early to jump off this boat.

10 stocks we like better than AbbVie
When our award-winning analyst team has a stock tip, it can pay to listen. After all, the newsletter they have run for over a decade, Motley Fool Stock Advisorhas tripled the market. *

They just revealed what they believe are the best stocks for investors to buy right now … and AbbVie wasn’t one of them! That’s right – they think these 10 stocks are even better buys.