Canadian author Malcolm Gladwell has made clear his thoughts on working from home, outlining his belief that the trend is ‘hurting society’ and that any future recession will likely force employees back into the office.

But Gladwell, who has written six bestsellers, has long spoken of his own personal work-from-home routine – and for more than a decade has been seen out and about working remotely in New York cafes and restaurants.

Nevertheless, the best-selling author and host of the podcast Revisionist History, which has millions of subscribers shared his views during an interview with The Diary Of A CEO podcast.

‘As we face the battle that all organizations are facing now in getting people back into the office, it’s really hard to explain this core psychological truth, which is we want you to have a feeling of belonging and to feel necessary.

‘And we want you to join our team. And if you’re not here it’s really hard to do that, ‘Gladwell explained.

Gladwell, however, has a history of frank discussions about his own long-running avoidance of The New Yorker’s office – where he is a staff writer. He has instead made a habit of working from his swanky West Village home or neighborhood coffeeshops – even before the pandemic ravaged New York City’s commercial office market.

The bestselling author revealed in a 2008 interview with New York Magazine that he refused to trek even a few miles to the magazine’s upscale office, then based in Midtown – citing his ‘aversion’ to the neighborhood. 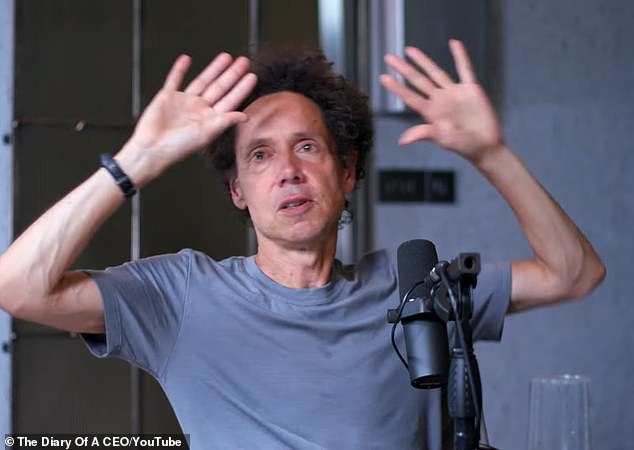 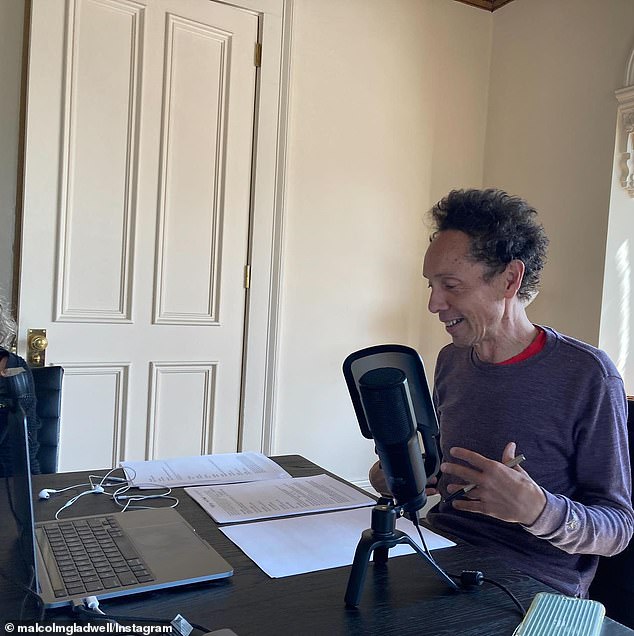 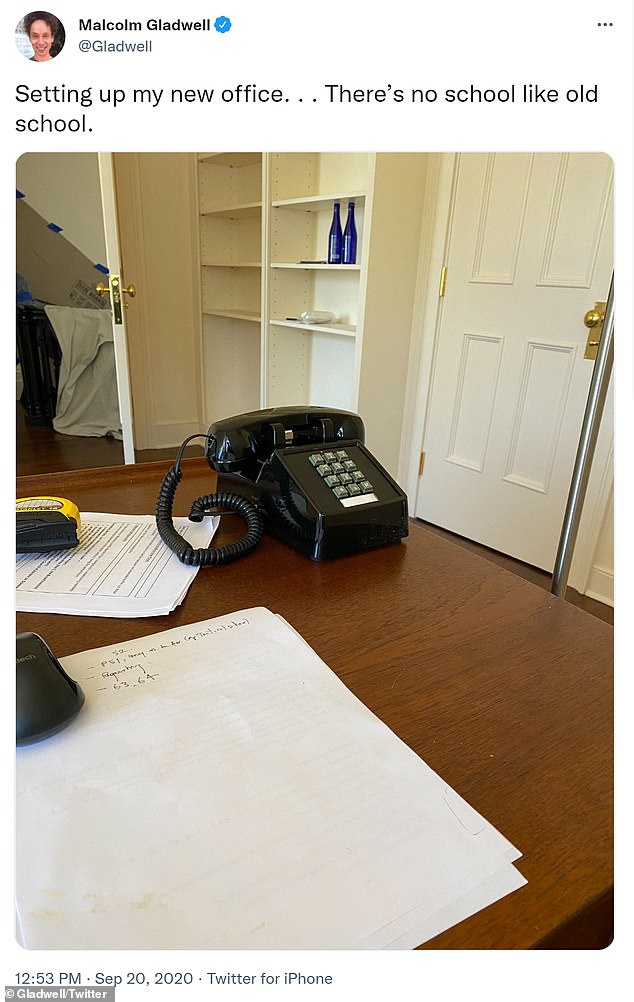 Indeed, the article also chronicled the lengths the New Yorker went to accommodate their all-star writer – going so far as to send couriers to his home to pick up fact-checking materials.

Years earlier, in 2005, Gladwell gave an interview to The Guardian at length in which he professed how he ‘hates desks’.

‘I refer to my writing as’ rotating’. I always say ‘I’m going to rotate’ because I have a series of spots that I rotate. ‘

At the time Gladwell shared how he had a number of cafes and restaurants that he flipped between. 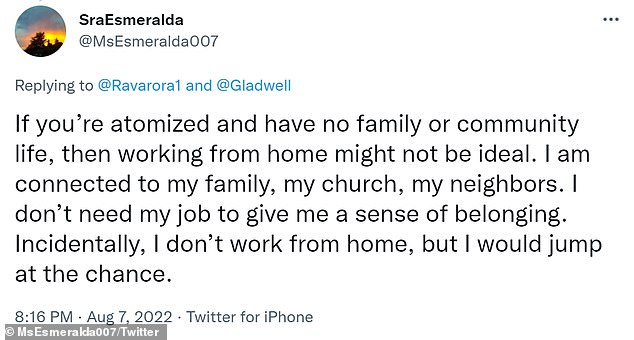 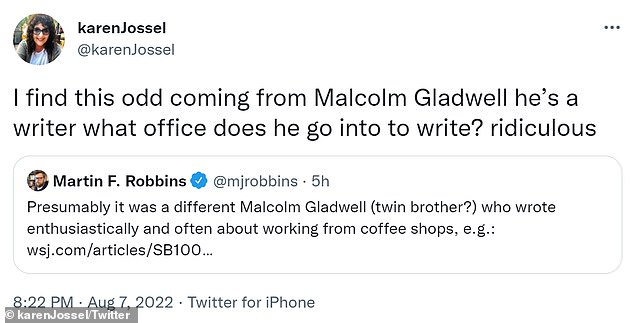 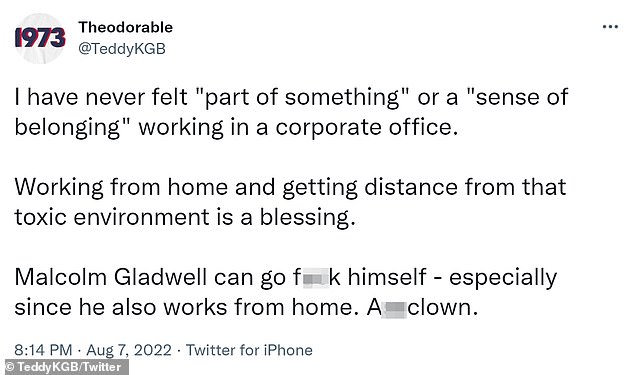 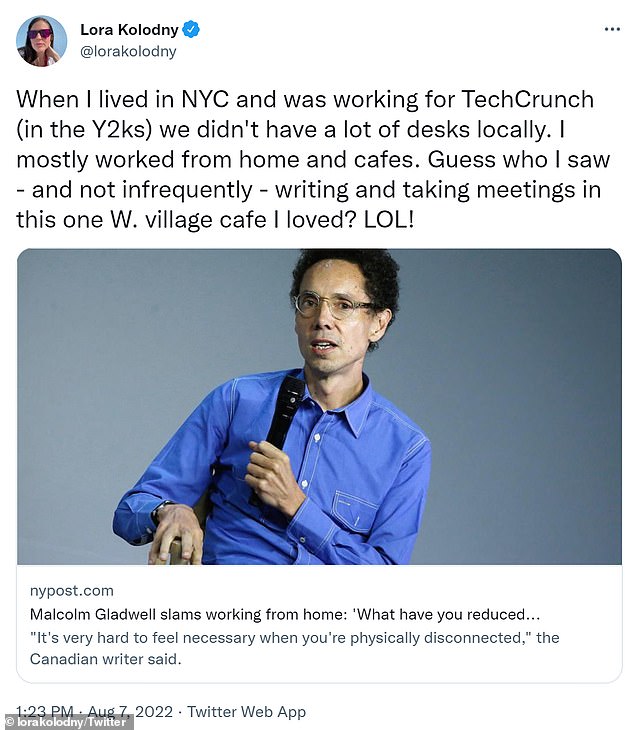 The sheer hypocrisy of Gladwell opining about the lack of enthusiasm of returning to an office while hardly frequenting one himself was not lost on social media users.

‘The waiters are all Australian and they play The Smiths all day long which I find so fabulous. I always go there on the weekends. Then there are restaurants in Little Italy that I go to. I often go to these places in the middle of the afternoon, when they’ll let me linger.

‘They have these huge windows and they open them out so that people on the street are walking right by you. You feel the traffic; you feel in the middle of things and paradoxically I find it very calming, ‘he added. 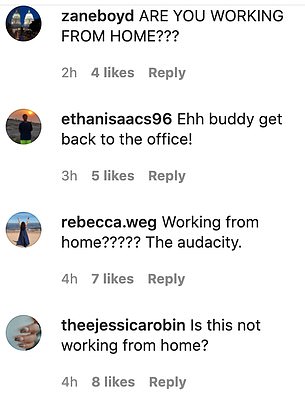 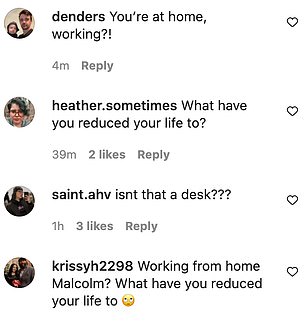 Despite having written a book called Tipping Point, one Twitter user noted how the author would sit in a West Village cafe where he worked and never left gratuities.

‘Malcolm Gladwell was a regular at the cafe I used to work at and he never tipped,’ wrote Devin McGee.

He was also regularly spotted by another coffee shop aficionado.

‘When I lived in NYC and was working for TechCrunch (in the Y2ks) we didn’t have a lot of desks locally. I mostly worked from home and cafes. Guess who I saw – and not infrequently – writing and taking meetings in this one W. village cafe I loved? LOL! ‘ tweeted Lora Kolodny.

In 2010, writing in the Wall Street Journal, Gladwell also spoke of his love of working in coffee shops, while simultaneously hating those who did likewise.

Gladwell then went on to list his favorite places to work from while suggesting others should not follow his example.

‘If I’m working there, the last thing I want is to see you hunched, pathetically, over your computer.’

Of course, Gladwell may well have been working remotely many years before it was commonplace and popular, but the very fact it was becoming more so in 2010 irked him tremendously.

‘The coffee-shop writer needs to be, as the sociologists would say, an outlier and not a pioneer. You don’t want to be the laptop cowboy who signals to other laptop cowboys that this is the place to be. You want the club that won’t have you as a member, ‘he wrote in the Journal.

The sheer hypocrisy of Gladwell opining about the lack of enthusiasm of returning to an office while hardly frequenting one himself was not lost on social media users.

‘God I cannot stand these damn hypocrites. Gladwell was a, well, outlier of working remotely – guess that’s only ok for bestselling authors but not the rest of us plebes, ‘wrote Julie S.

‘I have never felt “part of something” or a “sense of belonging'” working in a corporate office. Working from home and getting distance from that toxic environment is a blessing. Malcolm Gladwell can go f ** k himself – especially since he also works from home. A ** clown, ‘tweeted Theodorable.

‘Presumably it was a different Malcolm Gladwell (twin brother?) Who wrote enthusiastically and often about working from coffee shops,’ wrote Martin Robbins. 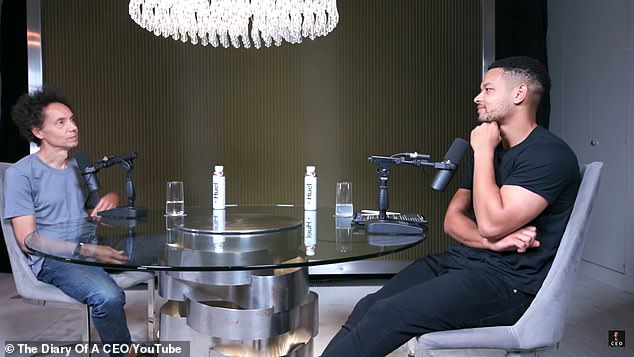 Gladwell, who has written six bestsellers and is the host of the podcast Revisionist History which has millions of subscribers, made the comments during an interview with The Diary Of A CEO podcast, hosted by Steven Bartlett, right 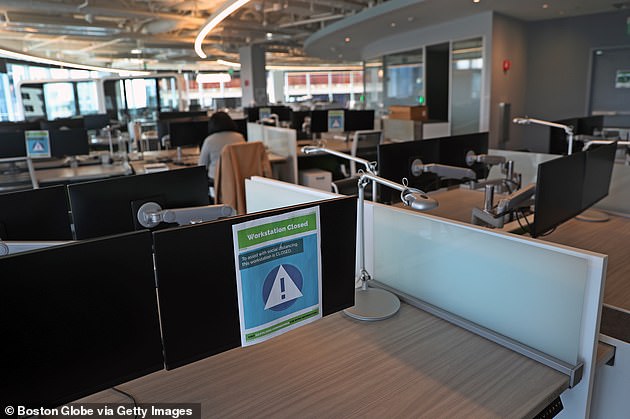 In San Francisco only two-thirds of the city’s’ workforce has returned to their desks. New York’s office occupancy remains even lower with an estimated 36% having returned

But when it comes to the rest of the population, Gladwell offered a different approach.

The author or Blink and Outliers said he believed that workers need to return to the office in order to regain a ‘sense of belonging’ and feel part of something larger than themselves.

‘It’s not in your best interest to work at home,’ he concludes. ‘I know it’s a hassle to come into the office, but if you’re just sitting in your pajamas in your bedroom, is that the work life you want to live?’

Gladwell says that a recession will likely drive employees who are ‘sitting in their pajamas’ back into the office.

‘Don’t you want to feel part of something?’ he asked. ‘I’m really getting very frustrated with the inability of people in positions of leadership to explain this effectively to their employees. 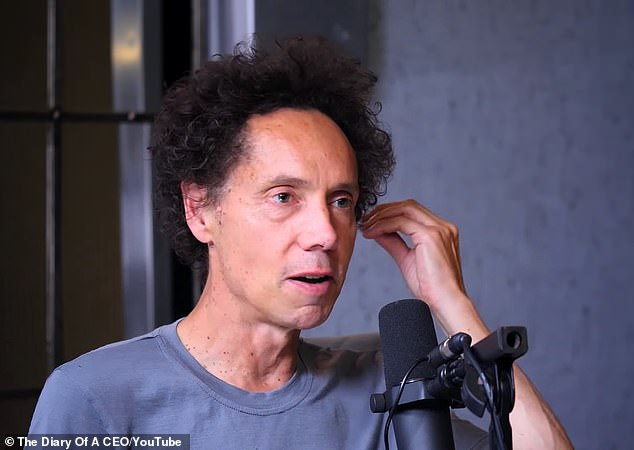 ‘It’s not in your best interest to work at home. I know it’s a hassle to come into the office, but if you’re just sitting in your pajamas in your bedroom, is that the work life you want to live? ‘ Gladwell asks

‘If we don’t feel like we’re part of something important, what’s the point? If it’s just a paycheck, then it’s like what have you reduced your life to? ‘

Gladwell’s remarks will likely be well received by the nation’s biggest cities who are struggling to drive workers back to the office.

New York Mayor Eric Adams and San Francisco Mayor London Breed have urged workers in sectors of tech and finance to return to the office with their presence helping other small businesses that in turn rely on office foot traffic.

In San Francisco only two-thirds of the city’s’ workforce has returned to their desks. New York’s office occupancy remains even lower with an estimated 36% having returned.

City officials say that the continuation of remote work led to a shortfall in $ 400 million in tax revenues in 2021. 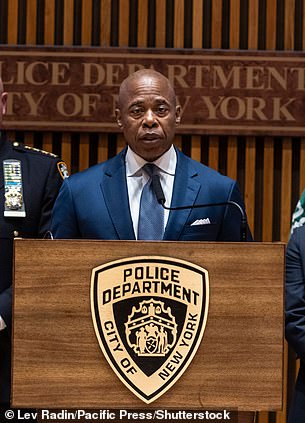 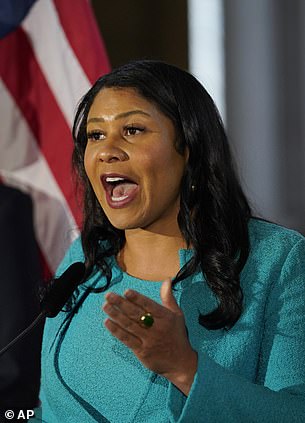 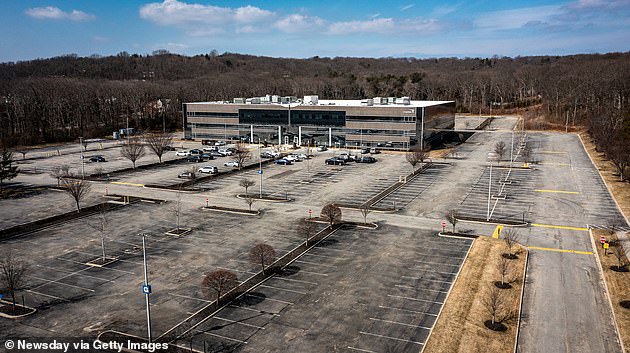 Fast food chain, Shake Shack, revealed that it had missed its sales forecasts because office workers have been returning to their office cubicles far slower than predicted.

Security company, Kastle Systems, calculated office occupancy in 10 major US metro areas is averaging 44% in the week ending July 27, according to Bloomberg News.

But financial and technology companies are in a difficult position fearing mass resignations should they force workers back into the office.