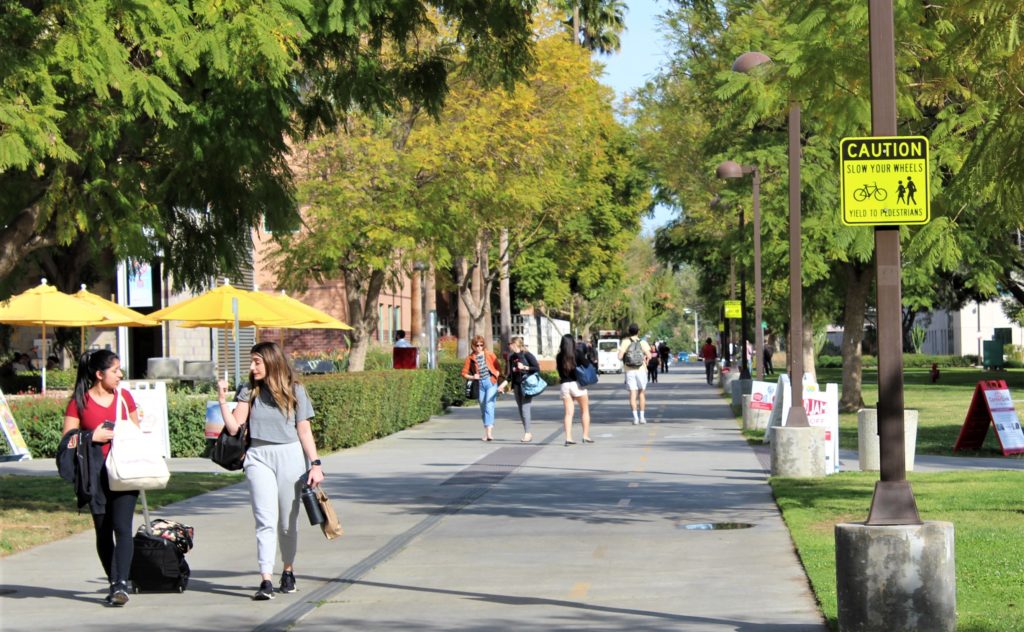 Calling the investments a “game-changer” for California’s public universities, Gov. Gavin Newsom on Friday reaffirmed its pledge to give annual budget increases of 5% to the University of California and California State University systems over the next five years. In exchange, the systems will be expected to make progress and report annually on goals including improved graduation rates, growing enrollment, making college more affordable and preparing more students for high-demand careers.

Newsom originally proposed those funding agreements in its January budget proposal, dubbing them “multi-year compacts,” and revealed additional details Friday as part of its May budget revision. He also finalized what he is calling a “multi-year roadmap” with the state’s system of 116 community colleges. The community college system is expected to make progress toward similar goals as UC and CSU, though Newsom does not tie specific funding increases to those goals since the community colleges receive base funding through Proposition 98.

In a move described by officials as unprecedented, the governor is also expecting UC, CSU and the community college system to submit annual reports detailing their progress on each of their goals by Aug. 30 for the Community Colleges and Nov 30 for the universities, beginning in 2023, to Newsom and the Legislature. The system will mark the first time that progress reports are made to state lawmakers on those specific metrics, according to Newsom administration officials.

Absent from Newsom’s higher education proposals on Friday was funding to reform the Cal Grant program, awarding financial aid for the state’s main system. Key lawmakers and other advocates for financial aid reform hoped Newsom would include funding for AB 1746, legislation that would make about 150,000 students newly eligible for financial aid while also simplifying what critics say is an overly complex financial aid program.

Reactions to the five-year compacts were mixed. Cal State interim Chancellor Jolene Koester said it was disappointing to see the system’s 2022-23 base funding in the May revision remain the same as the January proposal. CSU would receive an additional $ 211 million in base funding in 2022-23 over its 2021-22 funding, while UC would get about $ 200.5 million more.

“With many economic challenges such as inflation impacting every dollar earned by our talented and dedicated faculty and staff, it is imperative that we receive additional funding to better support them and their families while providing appropriate compensation while they work to fulfill the university mission,” Koester said.

Koester said the CSU system will “intensify efforts” to make sure legislators are aware of the university’s needs.

In remarks Friday morning about the budget, Newsom said the promise of 5% funding increase would help UC and CSU plan for the future, unlike in the past when they were not guaranteed any specific amount of funding from year to year.

“We think this will be a game-changer,” Newsom said.

What’s unclear is that the systems could lose funding if they fail to make progress on key goals. So far, the only enforcement mechanism unveiled by Newsom is the annual report that each system will need to provide.

In the agreement between the Newsom administration and the 23-campus CSU system, the campuses will add 14,000 more undergraduate students over the four years through the 2026-27 academic year. That’s equivalent to 1% of annual enrollment growth. The system enrolled 477,446 students in fall 2021.

CSU also agreed to eliminate equity gaps in graduation between low-income freshmen and transfer students and their higher-income peers, as well as gaps between underrepresented minorities, including Black and Latino students and their white peers, by 2025.

The university system agreed it would also lower the costs of textbooks and other instructional material by 50% to save $ 150 million a year for students. CSU also agrees to increase online courses by 15% so every student who wants to take an online course will be able to do so.

The May revision also includes one-time funding for some CSU campuses, including $ 80 million for a new science, technology, engineering and math facility at the San Diego State University Imperial Valley campus and $ 67.5 million to CSU Fullerton’s engineering and computer science innovation hub.

“We’re dealing with the workforce in a way that I’m really excited about working with San Diego State University,” Newsom said. The campus will build a new 65,000-square-foot site that will house new nursing programs, and expand public and environmental health programs.

Newsom also offered $ 100 million in one-time funding to support deferred maintenance throughout the system’s campuses and energy efficiency projects and $ 81 million in ongoing dollars for undergraduate enrollment by 9,434 in the 2022-23 academic year.

As part of its five-year compact, UC will be expected to increase undergraduate enrollment by 1% each year following 2022-23 – for a total of 8,000 students over the final four years of the compact. In fall 2021, UC enrolled 230,529 undergraduates. Lawmakers and Newsom are pushing UC to enroll an additional 7,000 students in fall 2022, though the system has balked so far at that suggestion.

Other goals for UC include offering 60% of undergraduate paths to a debt-free degree by 2026 and a growing number of students who get a degree in high-demand areas such as STEM fields by 25%. For incoming California residents in 2022-23, tuition at UC will cost $ 13,104, and that number will increase for each incoming class over the next five years. Many students get their tuition fully covered through the state’s generous financial aid programs but often take on debt to pay for housing and other living expenses, which are especially expensive in California.

In addition to the annual base budget increases that will be coming to UC, Newsom also offers a number of one-time funding programs for the 10-campus system. They include $ 185 million for climate research across the system and $ 300 million for a new Institute for Immunology and Immunotherapy at UCLA.

Newsom’s proposals for California’s 116 community colleges were praised Friday as “historic” by Eloy Ortiz Oakley, the systemwide chancellor for the colleges. The budget includes $ 375 million above what Newsom proposed in January to increase the base of the Student Centered Funding Formula, a formula that determines how colleges are funded.

In one-time funding, the system would get $ 750 million that would be allocated to districts as block grants that they could use to address pandemic-related issues or reduce long-term obligations and $ 1.5 billion for deferred maintenance and energy projects. The colleges will also receive one-time funds for initiatives including student retention and enrollment, the common course numbering and technology upgrades of the implementation.

“The Governor’s revised budget proposal provides unprecedented levels of support for California community colleges, strengthening our ability to advance educational equity and economic mobility for students and their families,” Oakley said in a statement.

The bill would make about 109,000 additional community college students eligible for financial aid by eliminating GPA requirements and guaranteeing awards to students with a household income low enough to make them eligible for a federal Pell Grant. About 40,000 students attending four-year universities would also become newly eligible for awards.

The bill would also simplify the program by consolidating Cal Grants into just two awards, one for community college students and one for students attending a four-year university.

“Today’s college students need affordable access to higher education pathways, especially as our student communities continue to grow and the workforce challenges the weather brought on by the pandemic,” the Fix Financial Aid Coalition said in a statement voicing displeasure that funding for AB 1746 was not included. That coalition includes statewide student governments for each of California’s three public college systems, as well as the California Student Aid Commission and college access groups such as the Campaign for College Opportunity.

A spokeswoman for Newsom’s Department of Finance said while there could be negotiations with the Legislature on the Cal Grant reform this summer, the cost of the AB 1746 runs counter to the administration’s goal of being “fiscally prudent.” Implementing the legislation would cost about $ 315 million in its first year and about $ 375 million in subsequent years.

The spokesman said the administration focused on funding one-time projects with its budget proposal rather than initiatives that would require annual spending. Supporters of Cal Grant reform, though, have said California should be able to afford AB 1746’s price tag given the state’s budget surplus.