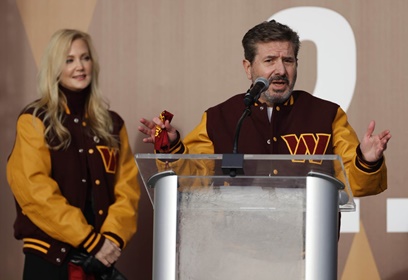 The Commanders retaining Bank of America to explore all options regarding the team’s future marks the “first time publicly, really the first time ever, Daniel Snyder has acknowledged that at some point soon he may no longer be the owner” of the franchise, according to NFL Network’s Ian Rapoport. A potential sale would be “something that no doubt fans and many, many people in the Washington DC area and several owners around the league would celebrate.” It also would mean that fellow team owners would not be “forced to vote him out” if Snyder sells the team, resulting in a “much more clean break, I would say, than the league anticipated.” NFL Network’s Judy Battista added that a complete sale of the organization “would be the preferred outcome” throughout the NFL. Several owners contacted in recent days indicated that they “thought they had the 24 required votes to oust him, but there were also real questions about whether they had the stomach to actually go through that process” (“NFL Now,” NFL Network, 2/11). YAHOO SPORTS’s Charles Robinson notes a high-ranking NFC exec “reacted to the news with a twinge of skepticism.” The exec said, “It might get him past the (December) meetings if he leaked that story. If he thinks there could be a vote (on his ownership of the team), leaking a story about selling could sway some owners to keep their powder dry. The way he maneuvers, who knows what’s real. Maybe it’s true, but I guarantee there are more people in wait-and-see mode than buying that he just changed his mind all the sudden.” Few people are “willing to take a statement at face value,” while even fewer are “willing to believe there isn’t some self-serving angle in play” for Snyder (YAHOO SPORTS, 3/11).

SALE MIGHT BE HIS BEST CHOICE: In DC, Jhabvala, Maske & Clarke in a front-page piece report while a sale of the Commanders is “only one of the possibilities,” it may be “the most viable option” for Snyder. As the Broncos’ sale earlier this year showed, interest among wealthy entities in owning an NFL franchise “remains extremely high given the rapidly escalating values ​​of franchises.” Snyder’s “history of conflict and litigation” with his business partners and top execs “probably would be another consideration for potential investors.” Any potential transaction would “require approval of three-quarters of the other team owners.” A vote would take place at a time when Snyder “faces intense scrutiny from his peers of him,” amid probes by the NFL, the House Committee on Oversight & Reform and the attorneys general of DC and Virginia. It was “not immediately clear” Wednesday whether any owners “urged Snyder to sell” (WASHINGTON POST, 3/11). WFAN’s Boomer Esiason said of Snyder, “I feel like he’s financially getting squeezed where he knows that he can’t do business the way other NFL owners do business within the league” (“Boomer & Gio,” WFAN, 3/11).

HARD TO CLOSE THIS DOOR: ESPN’s Adam Schefter said, “It’s hard to imagine that you embark down this road, open the door to it and not go through it. … Snyder has enough money he doesn’t need to bring on minority partners.” Schefter added the NFL “would have no problem fast-tracking this sale, so whatever it takes to get it done it won’t be an issue” (“SportsCenter,” ESPN, 2/11). The LA Times’ Bill Plaschke said, “If you make an announcement like this, you’re not trolling for minority owners. You do that quietly. You make an announcement like this, you’re saying the team is for sale” (“Around The Horn,” ESPN, 2/11). SI’s Albert Breer wrote “while this might not be completely over, most who run in league circles now think it basically is.” One team president said, “You don’t go down this path, and make this big a deal of it, over an LP [limited partner] Compartir.” Breer notes the next steps, “assuming the end is near for Snyder, should be really interesting.” The “baseline” for the Commanders would be $5B, with a “good chance the number would climb” over $6B and possibly reach $7B (SI.com, 2/11). The WALL STREET JOURNAL’s Beaton & Radnofsky reports a Commanders sale could “set the stage for a record-breaking auction.” The Broncos “shattered the price for a North American sports team,” and people inside the sport have long thought if the Commanders hit the market, the price tag would “exceed that given the franchise’s rich history and its location” (WALL STREET JOURNAL, 11/2).

OTHER OPTIONS STILL EXIST: In DC, Jerry Brewer writes the announcement “doesn’t mean Snyder is certain to sell the team.” Snyder “could be attempting to strengthen his financial position as he continues the endless pursuit of a new stadium,” and the “cleanest way to do so would be to seek new minority investors.” Snyder last year bought out three limited partners for $875M after a “contentious process,” and it would be “an embarrassingly imprudent decision for any businessperson to partner with Snyder.” Brewer: “It makes no sense morally; joining forces with an NFL pariah invites incomprehensible scrutiny and guilt by association. It’s questionable financially, too; the price tag would be exorbitant for such a small percentage of a team in which the investor would have little say” (WASHINGTON POST, 3/11). In Richmond, Michael Phillips noted Snyder and his family de el own virtually 100% of the team, and if they can find a buyer for a minority share, they can “generate the capital they’d need to privately fund a new stadium.” That could then “buy him some time with the league” before any vote to remove him takes place. However, it is “tough to imagine” a billionaire turning a portion of his fortune over to Snyder “at this stage of the game, though, without insisting on calling at least some of the shots” (RICHMOND TIMES-DISPATCH, 2/11). THE ATHLETIC’s Kaplan & Standig wrote it can be debated whether a new stadium in Northern Virginia, the Maryland suburbs or a return to DC “makes the most financial, practical, and emotional sense.” However, there is “no question why such chatter is dormant these days: Few, if any, of these decision-makers want to enter into a partnership” with Snyder. Remove that “massive hindrance, and the bidding war soars” (THE ATHLETIC, 2/11).

PREPARED FOR ANOTHER BAIT-AND-SWITCH: USA TODAY’s Nancy Armor writes Snyder “probably figures he can entice some other billionaires” with the prospect of owning the Commanders, and then “bait-and-switch them into purchasing minority shares.” That, or Snyder “thinks he can outsmart his fellow owners” ahead of investigation by former US Attorney Mary Jo White’s report. By “appearing willing to sell, or take on partners,” he can “pretend he’s been humbled and is amenable to making changes.” Once the “heat dies down,” he will “go back to being his miserable old self.” Armour: “Either way, we’d still be stuck with Snyder. Which makes Wednesday’s announcement among the worst of the many awful things Snyder has done” (USA TODAY, 11/2). ESPN’s Tony Kornheiser said he does not believe Snyder is “going to sell the whole thing.” Kornheiser; “This is strategic on his part. He’s a man who’s trapped in a corner. If he can sell 30-40% of the team and he can sell it to somebody who’s female or somebody who’s a minority, then he can get the league to say, ‘Well, he’s on the right path” (“SportsCenter,” ESPN, 2/11).