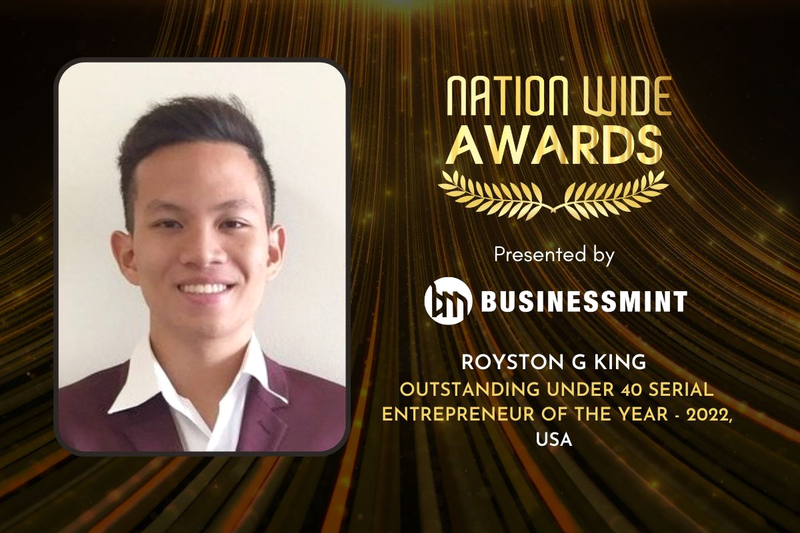 Serial entrepreneur and self-made multi-millionaire Royston King has been awarded the prestigious “Outstanding Under 40 Serial Entrepreneur of the Year 2022, USA” award by Business Mint, India’s leading and most credible market research company and the one-stop destination to serve organizations and entrepreneurs for professional advancement through research and recognition approaches.

Royston, who is of Malaysian Chinese descent and is yet to turn 22, has made an indelible mark in the field of entrepreneurship. In addition to being a successful and self-made serial entrepreneur, Royston is the author of multiple bestselling books, social media personality, an expert guest contributor, a most sought-after TEDx and keynote speaker, and a preeminent philanthropist.

“I am humbled and thrilled to be receiving the “Outstanding Under 40 Serial Entrepreneur of the Year 2022 USA” award by Business Mint. The award is a recognition of the success I have achieved so far and is also an inspiration for the milestones that lay ahead in my journey,” says Royston.

We all know the importance of starting early, but Royston is someone who has actually done so. He made the first investment of his life at 14, followed by starting his own venture, which was sold when he had just turned 17. He has successfully brought down age and race barriers that many entrepreneurs face and turned into a super achiever.

Royston is also the advisor and partner at Rotol Group Of Companies, Chakri Group Of Restaurants/Rotol Food Chain, and Global Brand Partners Pte Ltd. He is also associated with Samurai 2K Aerosol, Founders Space, Aladdin Group, Whizspace, and many other businesses.

“My success also shows that if someone sets a goal and works hard to achieve it, nothing can stop him from achieving it,” says Royston.

Royston is the youngest son of Datuk Seri Garry, also a successful self-made multi-millionaire and a well-known and respectable entrepreneur. However, Royston was very clear from the beginning that he would become successful with his own efforts and not because of his father, and this is something he has managed to achieve.

With his wealth already touching eight digits, Royston is poised to emerge as a billionaire sooner than later. He is also committed to using his ideas, wealth, and resources to usher in a revolution in the lives of people.

If you detect any issues, problems, or errors in this press release content, kindly contact [email protected] to notify us. We will respond and rectify the situation in the next 8 hours.