When you sell supercars, you need a super HQ. So when London-based McLaren Automotive moved its headquarters from New York to the Dallas area, it placed design at the top of its list. McLaren hired Dallas-based Merriman Anderson Architects (MMA) to conceptualize and design their new campus, which houses the brand’s entire American fleet of supercars to enhance the “flow of engineering and diagnostics under one roof.”

All those supercars in one cool place

McLaren’s new campus is dedicated to dealer sales and technical training along with being the home base for its North American executives and staff.

But—about those cars. Each McLaren supercar is assembled by hand at the McLaren Production Center in Surrey, England, and sold through over 100 retailers in 40 markets around the world, the company says.

Previously, McLaren warehoused its fleet of cars across the US, which complicated their inventory maintenance. With the entire fleet rolling under one roof at the new HQ, MMA was tasked with finding a unique way to showcase many millions of dollars worth of roaring, musclebound, high-performance works of art.

One solution was designing gleaming white workshop areas, with one (above) offering a corner “infinity cove” with a 19-spotlight lighting environment. That setup is ideally suited for vehicle photography.

A project team gets off the line fast 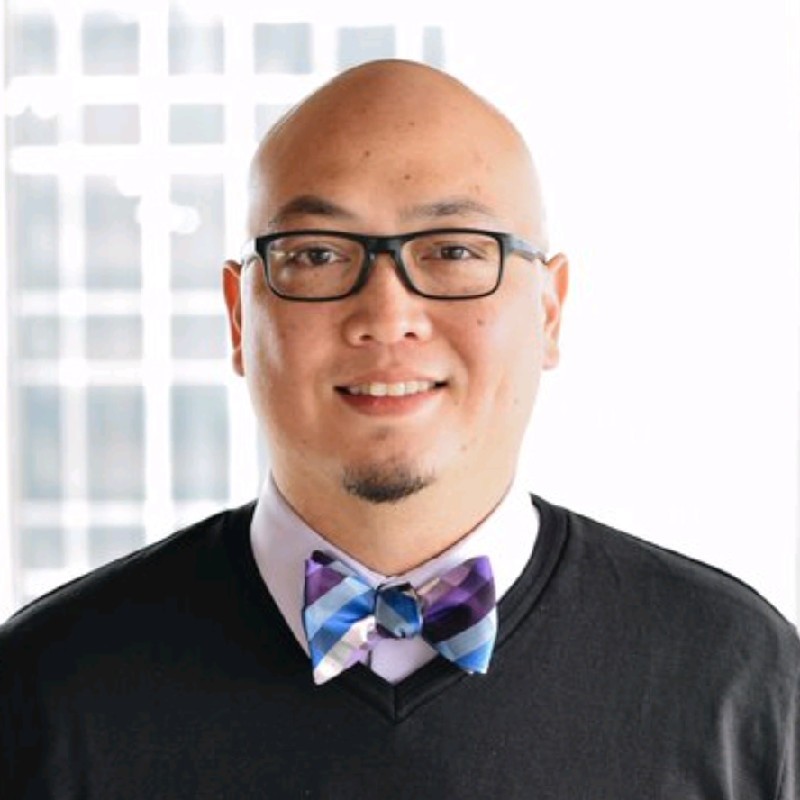 To achieve that and more, MMA needed partners. The project team included JLL as project manager; Hill & Wilkinson as general contractor; B&H Engineers as MEP engineer; and ala for lighting design, with MMA providing the architecture and interior design.

The project came with challenges. The team needed to renovate an existing office/warehouse, which required a “considerable amount of demolition,” and additional plumbing was needed for adequate water delivery.

MAA says it “resolved constraints by re-appropriating space within the footprint,” and solved one of the biggest puzzles — four-foot docks originally built for 18-wheeler deliveries — by engineering a steel vehicular ramp into the space and adding additional ramps inside to “even out the ground level.”

Seeing ‘the inner workings of a laboratory’

Yes, that tech training and maintenance workshop above looks cleaner and nicer than most people’s homes—from the gleaming white floors to the pristine lighting to the pops of color igniting from each supercar’s chassis.

The entire effect is by design.

MMA’s overall concept imagined the POV of a visitor—and enabled them to see “the inner workings of a laboratory.” Much of the HQ’s footprint is dedicated to dealer sales and technical training, as well as the executive and administrative offices. But everywhere one looks, one is meant to see “a perspective of the inner workings of McLaren.”

“The space is meant to display the genius of McLaren Group’s Automotive division,” he added in a statement. 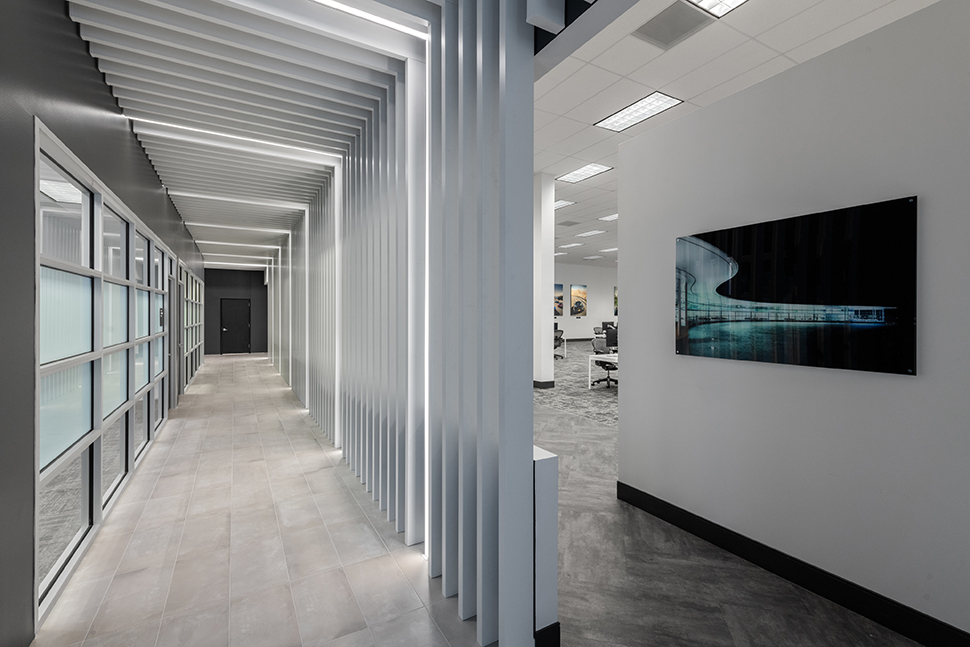 MMA designed an overall color and material palette that drives home a crisp combination of light and medium gray, with anodized aluminum window mullions. “Interior color and material palette of white, charcoal, pewter and light gray complement the glossy white resinous floors in the service and tech bays and the white oak wood accents in the interior spaces,” the company says.

The contemporary, polished look keeps the eye moving quickly — until it lands on the supercars. Those arresting pops of color are what the entire HQ is about, so the palette is designed as a clean canvas that puts the cars first above all.

In places throughout the HQ, a sleek wood grid ceiling system is used as an “updated architectural response to an exposed roof system.” The grids house the LED channel lighting.

An enfilade of aluminum louvers (seen above) is meant to make a statement for visitors navigating the gallery walkway between the reception and Meet and Greet spaces.

Showroom has a big movie screen—and a big reveal 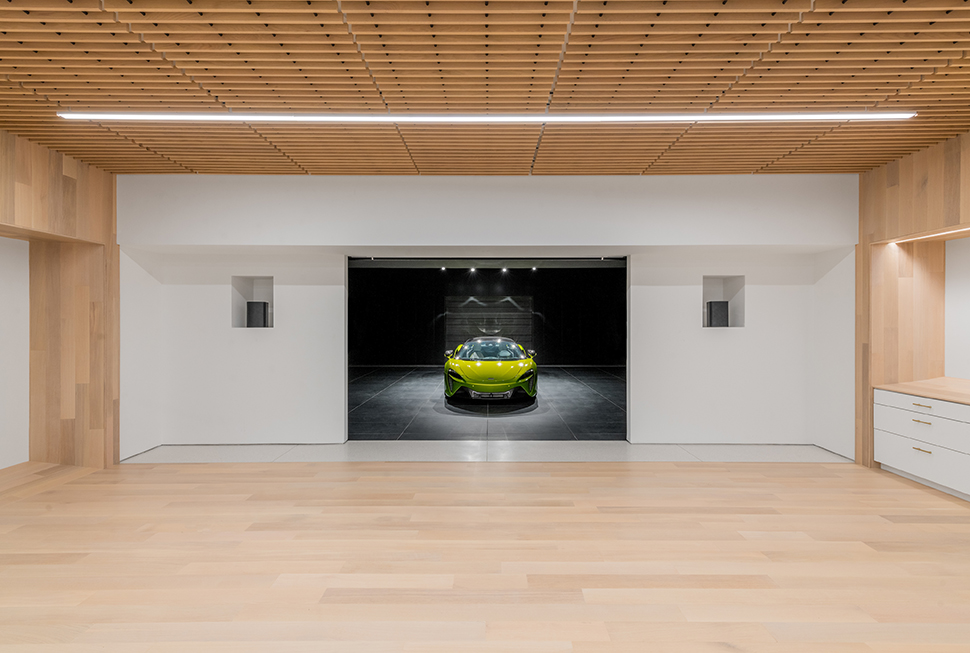 McLaren’s supercar showroom was designed as “two separate spaces that can join and divide for flexible function capacity,” MMA said.

The “Meet and Greet” area (partially seen above) can serve as an entertainment space for small events. It features an Italian-designed, 12-by-8-foot movie screen for projected images and videos, and serves as a place to showcase samples and work with clients on custom designing their vehicles.

The recessed movie screen is motorized to rise and fall “at ultra-fast speed,” MMA says, revealing a dramatically lit featured vehicle (the screen has been raised in the above photo). This jaw-dropping presentation room will be used for “sneak peeks” of unreleased models for dealers, focus groups, and media.

A McLaren Special Operations area is set aside for clients to work with McLaren designers and engineers on unique specifications for their vehicles.

Furnishings look as aerodynamic as the supercars 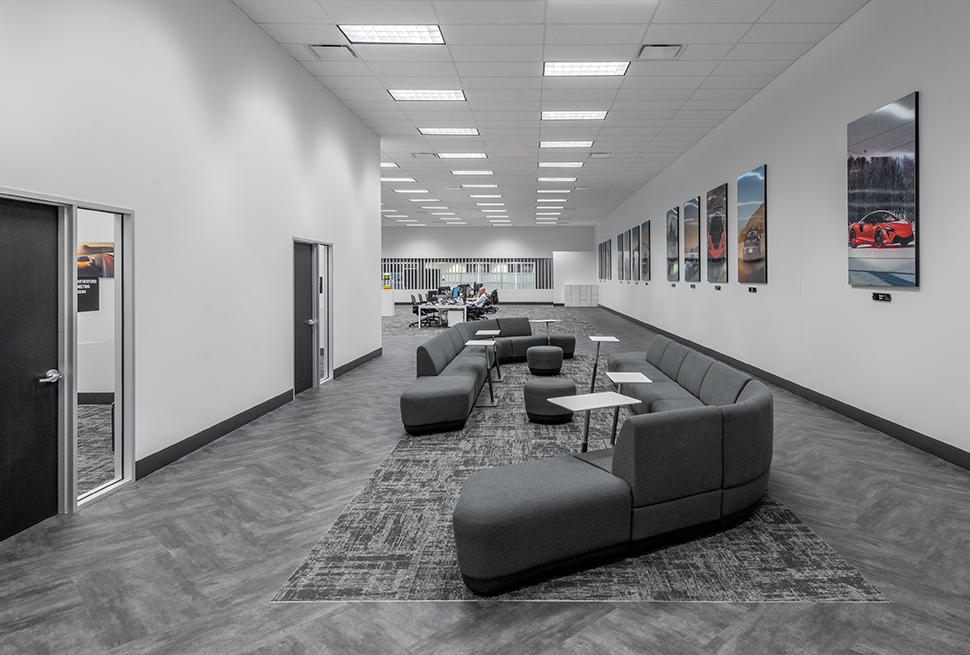 From streamlined sofas to razor-thin tabletops, the HQ’s minimalist office furnishings look as aerodynamic as a 2022 McLaren GT.

Nicolas Brown, president of McLaren’s Americas division, runs tea new office. The company told us it expects to have 25 employees in the office by the end of the year, and have a total of 30 employees on their regional team

Those figures spotlight both McLaren’s hybrid work practice and the field-based nature of its US operations. 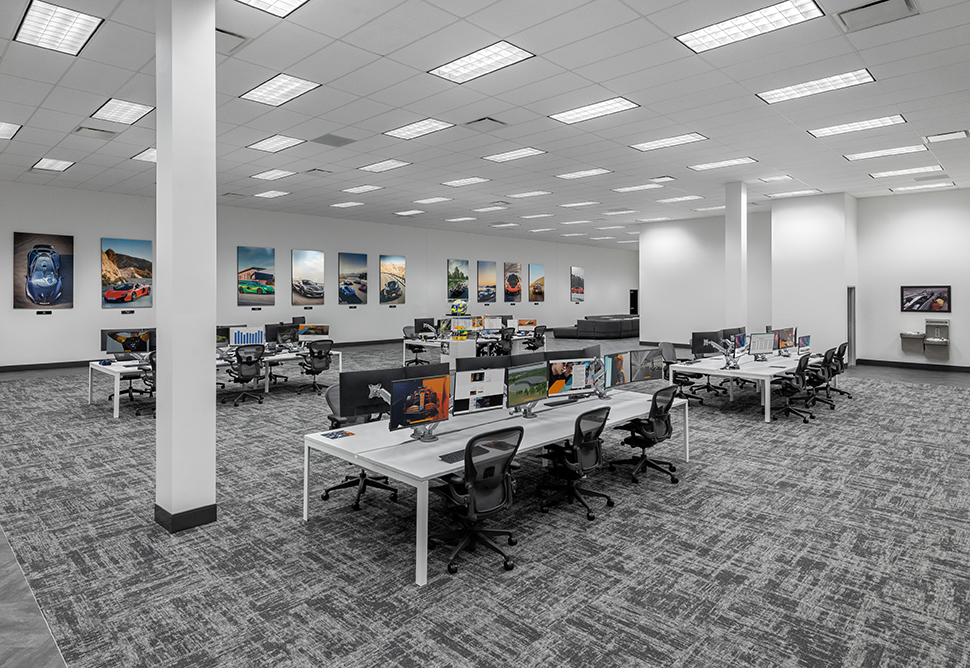 All furnishings are contemporary, flexible, and multi-purpose.

An art gallery features McLaren Automotive and racing memorabilia, images, souvenirs and awards. This area doubles as an event space and can accommodate two supercars.

Two supercars? That sounds about right. You wouldn’t want to go home with just one. 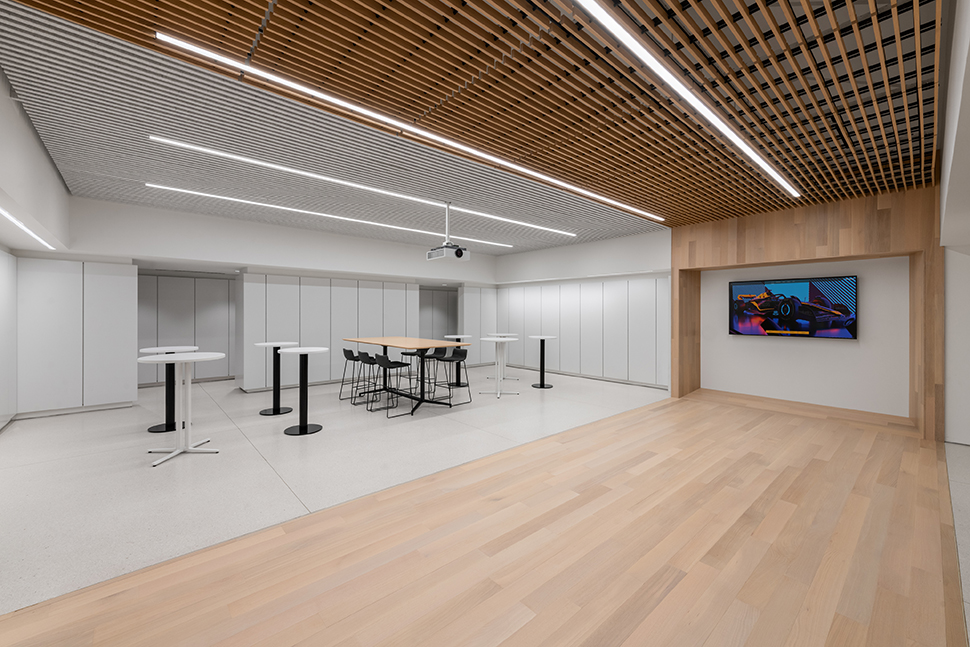 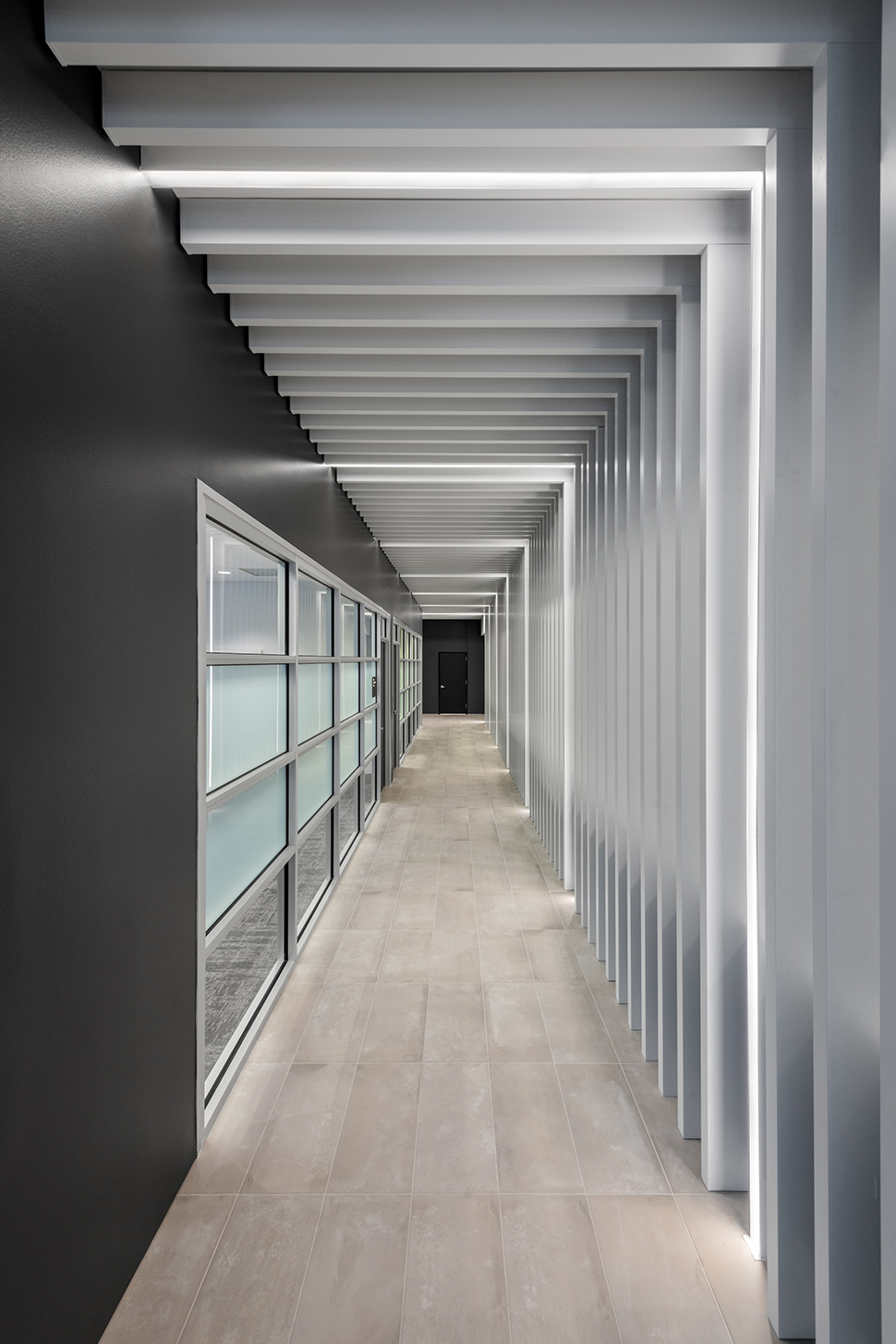 Sign up to keep your eye on what’s new and next in Dallas-Fort Worth, every day.