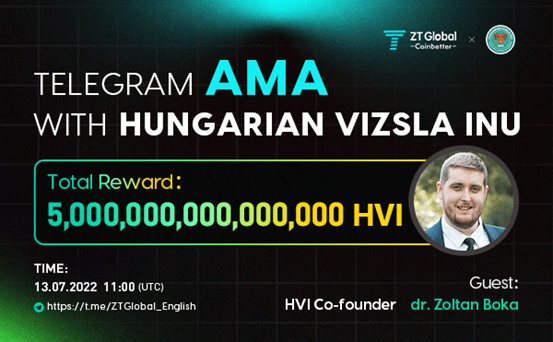 At 11:00 on July 13, Singapore time, the Co-founder of HVI project, dr. Zoltan Boka visited ZT Club, shared HVI project with users, and looked forward to the value of HVI.

At the beginning of the AMA session, Dr.Zoltan Boka introduced the token information of HUNGARIAN VIZSLA INU. The project is divided into two tokens, HVI and VizslaSwap, hoping to support the token value through the payment system and other incubation projects in the future.

HVI is the first major Hungarian investment and charity token on Binance Smart Chain. Originally a Memecoin, the goal was to become a significant global altcoin.

The team has built a friendly crypto community to create and grow the HVI ecosystem – while also providing donations to dogs in need. The bottom line of the self-developed NFT MARKET is to adopt animals in the form of NFT, of which more than 90% are donations on average. The metaverse currently in development is to build a construction of a completely walkable own shelter, which is accessible through NFT-based P2E games.

VizslaSwap Token is a perpetual deflation token with a sufficient burn mechanism.

VizslaSwap is a decentralized exchange running on BNB Smart Chain with lots of features that let you trade and earn tokens. VizslaSwap Token is a perpetual deflation token with a sufficient burn mechanism. Trade directly from your wallet app. VizslaSwap doesn’t hold your funds when you trade: you have 100% ownership of your own crypto.

When asked about the project’s product planning for the next 6-12 months, dr.Zoltan Boka said excitedly, “The development of a completely unique NFT market is crucial and currently, the Metaverse being developed is to build a completely walkable self sanctuary, accessible through NFT-based P2E games. In addition to this, VizslaSwap is also expanding unique features such as MultiRouter purchases, where swappers can exchange them at the best exchange rate among the routers on the DEX networks.”

Then, dr.Zoltan Boka introduced the HVI token economics to users, 7% of the tokens have been collected in the HVI token contract, while the Burn account has the least tokens. HVI always has sufficient trading coverage. In terms of DEX, the liquidity ratio is continuously improved through the liquidity pool algorithm. At the same time, the burning of HVI is carried out through the NFT market and VizslaSwap, so that there is a real burning program behind HVI, which ultimately affects the rise of the exchange rate.

When asked about token holder rewards, dr. Zoltan Boka elaborated that among token holder rewards, the simple holder bonus comes from continuous transactions, ie from market turnover. After each purchase and sale, part of the tokens is redistributed among the remaining holders in proportion to their ownership. Stakings on VizslaSwap can have a higher reward and even in a different type of token.

“The team is very focused on charitable development. During 2021, many tons of food were delivered to the shelters. During one of these charities, we even set a Guinness and Hungarian record, which we are really proud of. Our goal is to be able to overturn this year after year, and to further promote adoption through the NFT market.” said dr. Zoltan Boka.

Towards the end of this AMA, dr. Zoltan Boka told users what it means to hold tokens as a long-term investment, HVI is the first Hungarian BEP-20 charity and investment token, and many incubation programs have joined it. Incubation programs provide passive income to projects, and all such programs are taxed at 2% on each purchase and sale directly in HVI as a purchase on the DEX. Currently, MarketCap is very low, users can get tokens at very favorable prices, at the same time, NFT Market also provides passive income, and we have very serious cooperation in the field of movies and music. HUNGARIAN VIZSLA INU aims for continuous growth, focusing on marketing that is truly timeless, not a lot of expensive and useless shill groups.

Currently, our token is allowed to trade on multiple exchanges, DEX side including PancakeSwap and VizslaSwap. In terms of CEX, including Hotbit, LBank, XT.COM, IndoEx, CoinsBit and ZT Global exchanges. Welcome to experience trading.

HVI has all the qualities that are rare in the crypto market: honest team, real purpose, long-term development plan, well-documented philanthropy, and even their team can be seen on national television. HVI is an interesting coin, the community has a good vibe and is full of passion and ideas.

ZT Club mainly integrates blockchain-related content such as project incubation, community integration, activity expansion, and industry education. Committed to promoting the vigorous development of the blockchain industry and building an industry ecosystem. Since its launch, it has invited a number of well-known industry leaders, rookie blockchain projects, capital institutions, popular communities and other guests, and successfully carried out multiple live broadcasts.

In the future, we will continue to bring new traffic, new resources, and new ways to play with the blockchain from time to time in the form of voice, video, and audio.